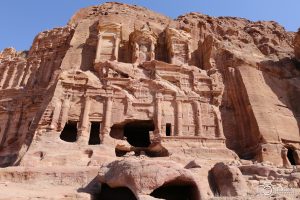 The Corinthian Tomb, which lies after the Silk Tomb, was built between 40 and 70 AD. The façade measures 27.55 meters in width and 26 meters in height. t resembles the Silk Tomb and the Treasury, particularly in the upper part, but is less decorated. There are four water basins in the front and on the side, which were used in the cleansing rituals. There are four rooms inside the tomb, three of which are square-shaped and lie on the left with one on the right that has an area of 13 m².