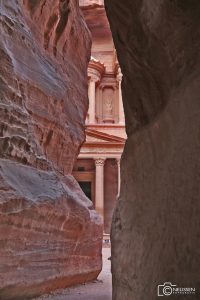 At the end of the long twilight of the Siq – the cleft in the rock that was and is the most famous entrance to the city – we emerge in front of the glowing façade of the Treasury (al-Khazneh), elaborately carved with floral motifs and Nabataean and Greek gods and mythological figures – Castor and Pollux, with horses, guiding the souls of the dead; axe-wielding Amazons; winged Victories; eagles and a Medusa head. All are funerary symbols. Presiding over them is al-’Uzza, the main goddess of Petra, here linked with the Greek goddesses Aphrodite and Tyche, and also Isis, the Egyptian goddess, who ruled the underworld and spirits of the dead. With its wealth of funerary symbolism, the Treasury was clearly connected with the Nabataean cult of the dead, but its date and function are unclear. Some scholars think it may have been commissioned by Aretas IV – a theory reinforced by the discovery in 2003 of some earlier tombs carved into the rock at the foot of the Treasury, containing pottery shards from the second half of the 1st century BC.