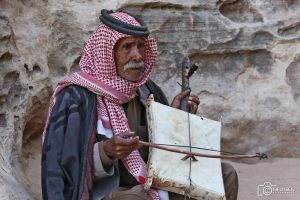 Traditional Single Stringed Rebab. In a small corner of Siq al-Barid, an older Bedouin man played the traditional single stringed Rebab with a horsehair bow. Though many variations exist, the rebab consists of a small, usually rounded body, the front of which is covered in a membrane such as parchment or sheepskin. There is a long thin neck with a pegbox at the end and there are one, two or three strings. There is no fingerboard. The instrument is held upright, either resting on the lap or on the floor. The rebab became a favourite instrument of the Ottoman (Turkish) Empire, and could be heard everywhere from the palace to the tea house.