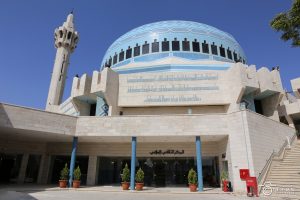 Completed in 1989 as a memorial by the late King Hussein to his grandfather, this blue-domed landmark can house up to 7000 worshippers, with a further 3000 in the courtyard. There is also a small women’s section for 500 worshippers and a much smaller royal enclosure. The cavernous, octagonal prayer hall is capped by a magnificent blue dome 35m in diameter, decorated with Quranic inscriptions. This is the only mosque in Amman that openly welcomes non-Muslim visitors.