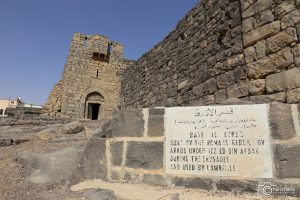 Azraq’s abundant water made it an obvious stopping place on the Wadi Sirhan trade route, and a magnet for desert bedouins. It also attracted the Romans who, under Septimius Severus (AD 193-211), established here an eastern military outpost of the Province of Arabia. If that was the first phase of the castle at the centre of Azraq Druze, there is little to show for it, for it went through several later incarnations.