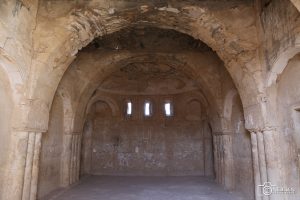 Interior shot of Qasr al-Harraneh. Qasr al-Harraneh remains an enigma to archaeologists and historians. Some experts believe that it was a defensive fort, while others maintain it was a caravanserais for passing camel trains. Yet another theory is that it served as a retreat for Umayyad leaders to discuss affairs of state. With its high walls, arrow slits, four corner towers and square shape of a Roman fortress, Qasr al-Harraneh would appear to be a defensive castle. However, the towers are not large enough to have been an effective defense, and may have instead been built to buttress the walls.