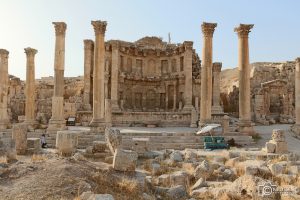 Nymphaeum Temple of Jerash. This ornamental fountain was constructed in 191AD and dedicated to the Nymphs. Such fountains were common in Roman cities, and provided a refreshing focal point for the city. This well-preserved example was originally embellished with marble facings on the lower level and painted plaster on the upper level, topped with a half-dome roof. Water cascaded through seven carved lion’s heads into small basins on the sidewalk and overflowed from there through drains and into the underground sewage system.