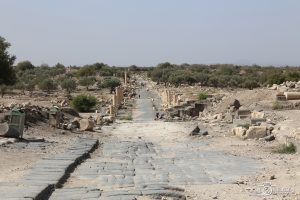 Umm Qais is a town in northern Jordan principally known for its proximity to the ruins of the ancient Gadara, also a former bishopric and present Latin Catholic titular see.
It lies in the Bani Kinanah Department and Irbid Governorate in the extreme northwest of the country, near Jordan’s borders with Palestine and Syria. It is perched on a hilltop 378 metres above sea level overlooking the Sea of Tiberias, the Golan Heights, and the Yarmouk River gorge.